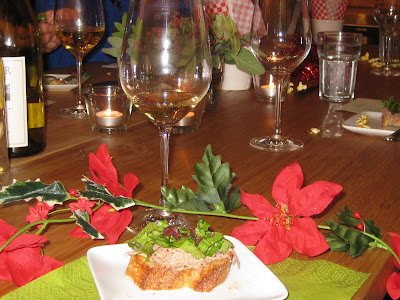 I enjoyed two festive holiday experiences in the Northern California wine country last week, one in Healdsburg, the chic Sonoma county town near Dry Creek Valley, and the other at Napa Valley’s Meadowood resort, the home of Auction Napa Valley.

Holidays in Healdsburg is a month of planned activities starting the day after Thanksgiving that includes parties, “Toyland” exhibits, winery open houses, even caroling in convertibles. My favorite is the three-hour “Strolling Dine-Around,” held at 18 restaurants all within easy walking distance of the historic and picturesque Healdsburg Plaza. This is a progressive dinner with four courses served every 45 minutes. So my friend Pauline and I had appetizers at Café Gratitude, which serves organic raw vegan food (we ate a delicious guacamole and sunflower seed pate with flaxseed chips that did not make me miss the more conventional dish); a second course, scrumptious tempura green beans and a green salad at Zin Restaurant & Wine Bar; a main course of risotto and prawns at A Divine Affair and dessert (lemon pot de crème) at Restaurant Charcuterie. It’s a lot of food, so strolling in the winter air (of course, I’m talking about a California winter), was invigorating and whetted the appetite for what was next.

Naturally all these restaurants are wine savvy and have a rich and varied selection of wines by the glass or bottle. You can even bring your own bottle(s). But I wouldn’t recommend it because the corkage policy is complicated. Although the fees are not high, you have to pay anew for the same bottle each time you enter a restaurant, the charge varies from place to place and according to whether it’s a Sonoma wine or not – too cumbersome in my opinion. Once we ran out of the “J” sparkling wine I had brought with me, we ordered Navarro Edelzwicker (an aromatic blend of Riesling, Gewürztraminer, Pinot Gris and Muscat) to go with the risotto-and-prawn dish, and it was a sublime combination. Next year, when the city of Healdsburg sponsors this event again, I recommend the restaurants either abolish all corkage charges for the night (while encouraging Sonoma County wines) or ban bringing your own bottles. When you are meant to enjoy yourself, simplicity is the key! 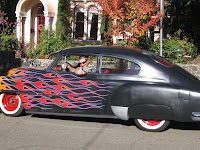 So walking between courses is a great idea, but when that’s not feasible, there is an appealing alternative. Pauline and I were driven from Café Gratitude to Zin Restaurant and Wine Bar in a restored vintage Chevy by former NASCAR driver Bryan Germone aka Hot Rod Tours. Bryan was fun, the car was nifty and there was a warm lap blanket in the back seat. Hot Rod Tours also provides a novel alternative to limo tours of the wine country.

The night before, I was invited to celebrate “The Twelve Days of Christmas” at the bucolic Meadowood resort in Napa Valley. For this benefit for Share Our Strength, a popular charity for chefs because it feeds hungry children, the resort invites 12 chefs from around the country and pairs their artisanal meals with Napa wines.

The night I attended, Paul Liebrandt of Corton in New York was the chef. His “modern French” cuisine contained a lot of foie gras, so it could not go wrong with me and the exceptional wines were from Napa’s PlumpJack and CADE wineries.  PlumpJack is the Oakville winery owned by billionaire Gordon Getty and Gavin Newsom, the mayor of San Francisco, and wine lovers are probably familiar with its intense Cabernet Sauvignon. CADE is their newest venture, a Howell Mountain winery built for its time -- LEED certified and built with the environment in mind. John Conover, partner with Getty and Newsom in the winery, introduced CADE’s Sauvignon Blanc and Cabernet Sauvignon bottlings, which were intense and fruity. Winemaker Anthony Biagi found a way to tame the tannins of his hillside Cab vineyards and bring out some spice in the 2006 Cabernet, which was paired interestingly with a wedge of Brillat-Savarin and a white chocolate coin.
Meadowood is pricey but also one of a kind in Northern California’s wine country: there are only 85 quietly elegant rooms (think Martha Stewart) scattered throughout 250 forested acres with a croquet lawn, tennis courts, spa, pools and a two-star Michelin restaurant. Wine fans couldn’t be in better hands – the owner is Bill Harlan of a little winery you may have heard about, Harlan Estate, and the resort employs a wine director primarily occupied with wine education and events centered around the elixir of Napa Valley.
Posted by Janice Fuhrman at 7:33 PM 2 comments:

Some of the most exciting aspects of the wine business these days involve the environmental issues of growing, vinifying, packaging and transporting wine for consumers. I have been following these issues avidly for a few years now; what is being discussed and accomplished these days at all levels of the wine business is both dynamic and encouraging.

Some information that came out of the second annual Green Wine Summit held recently in Santa Rosa, California, that I found interesting:
Keynote speaker Gil Friend, Founder & CEO of Natural Logic and author of The Truth About Green Business told his audience of more than 300 wine industry leaders: “Green wine champions understand that you don't have to choose between making money and making sense. The truth is that businesses, from vineyards and wineries to retailers and high tech companies, can build profit and reduce risk -- and contribute to a better world -- by learning from four billion years of R&D within nature’s living systems.”

The list of wineries serious about environmental issues just in Northern California alone, where I live, is too long to mention – which is good news. But two have come across my desk recently -- from as far away as Bordeaux (Vignobles LaCombe) and as close to home as Sonoma (Merry Edwards) -- that really impressed me with their efforts.

I recently tasted some lovely wines from Vignobles Lacombe of Bordeaux’s Medoc region, and discovered that owner Remi Lacombe in 2007 became the first wine producer in Europe to market his wines as “carbon neutral.” Although the wines were good enough for me to recommend, I felt even more drawn to them when I discovered what Lacombe has been doing to be an environmental steward in his very, shall we say, “traditional” part of the world. Lacombe acknowledges that many stages of wine production release carbon dioxide into the atmosphere. So he examined closely what he could do to reduce emissions while still continuing a viable business, and worked to offset carbon emissions he couldn’t reduce. La Combe used ClimatePartner, a German consulting firm specializing in climate protection, to calculate the wineries’ carbon emissions. “When you produce around 365,000 bottles (about 30,000 cases) of wine a year like we do, it gives you 1,000 chances a day to send a message to consumers and give them a chance to do something for the planet with us.”

That's the old world. At the western edge of the new world, Merry Edwards, the highly respected Pinot Noir specialist, sent her recent 2007 wine releases to wine writers with a wonderfully articulate tale – minus any promotional hype! -- of how her winery has dedicated itself to sustainable practices. I’m going to take the unusual step of reprinting it here because I think it describes simply and eloquently her commitment to sustaining a healthy environment.

“My first job as a young winemaker was at Mount Eden Vineyards, high in the Santa Cruz Mountains. Living and working in this remote location taught me firsthand lessons about conservation. Water for two homes and a winery was sourced from a tiny spring which dried up each summer and then had to be trucked in. For years after leaving that mountain, I could not bear the sound of a faucet running.
I brought in winery supplies and hauled out wine shipments, as no delivery company would make the arduous trek up the steep mile-long dirt road. Everything was recycled or composted – a trip to the dump was rare. The barrel and wine cellars were located underground with no refrigeration necessary. A huge garden supplied most of our fresh produce, while a flock of ducks, geese and chickens supplied eggs, meat and sentinels for guard duty.

Flash forward to 1998… to avoid fumigation at the Meredith Estate vineyard site, I hired a company to dig up and box thirty-two oak trees alive. This strategy removed nearly all large roots and associated oak root fungus, thus allowing the trees to be recycled as landscape features. The soil was then raked using a harrow, followed by a team of workers to remove remaining roots. Conserving natural soil microorganisms gave the young vines a healthy start.

A pond was developed to collect rainwater runoff from the steep hillside. It provides water for irrigation and frost protection, while supporting a variety of migratory waterfowl. Within site of the pond are owl houses and hawk perches to welcome these feathered hunters. The remaining gophers are trapped by hand – no poisons are ever used. Our deficit irrigation practices require minimal applications of water, by drip, late in the season.

Our modern vertical trellis system uses stakes formed from recycled car bodies, while the end posts had previous lives as drill stems in oil wells. Vines trained in this manner require far less chemicals than farming methods of thirty years ago. In partnership with our neighbor Gourmet Mushroom, we use the spent oak-based growing medium they generate as a nutrient-rich compost application for our vineyards. Processed grape skins, seeds and stems are also used to replenish the soil.

We continue to use renewable natural cork which in itself is recyclable. Our new winery facility, completed just last year, incorporates many green features. The solar system supplies a substantial part of our electrical needs and soon we hope to be 100% solar powered! A new style of industrial fluorescent fixture has cut lighting needs by fifty percent. Hot water is supplied by efficient, brainy, stand-by gas heaters plumbed in sequence, generating only enough hot water to meet demand. The parking lot is paved with permeable concrete, which allows rainwater to flow directly through this normally impervious surface. Our offices are not painted; instead the interior walls were coated with green certified Tobias Stucco. Our efforts continue – please join us in creating a sustainable future for us all.”
Posted by Janice Fuhrman at 10:15 PM No comments: